The Federal Government has given conditions for resumption of Abuja-Kaduna service.

The train service was suspended in March as part of measures to curb the spread of the coronavirus.

Minister of Transportation Rotimi Amaechi said the number of passengers per coach would be reduced from 88 to 40 to comply with social distancing.

He also said the ticket fare would double because of adherence to social distancing as proposed by the Presidential Task Force (PTF) on COVID-19.

The Minister further said the number of Police officers on board each coach would increase to enforce the COVID-19 guidelines.

Ameachi disclosed these on Saturday in Agbor during a test run ride of the Warri-Itakpe rail track.

He said President Muhammadu Buhari may commission the Warri-Itakpe rail track after it is handed over to the Ministry and the Nigerian Railway Corporation.

The Minister also disclosed that the Agbor Station and its entire facilties have been named after former President Goodluck Jonathan. 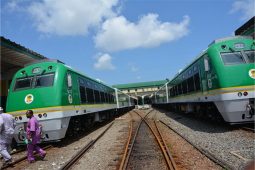 On the progress of work on Warri-Itakpe track, he said: “I think what brought us is to see that the project has been completed. I have just been briefed that Julius Berger has parked out and CCECC is mounting a little pressure for us to take over so that they can also quit.

“NRC and the ministry will take over. I have told Director Rail and the Managing Director of NRC to make arrangements for them to do their final inspection and then take over from CCECC and Julius Berger and then we will move on from there.”

On when the project would be commissioned, he said: “That will be dependent on the ability of the ministry to convince the presidency that we are ready for commissioning because it is the President that will do that and we are thinking about virtual commissioning.

“The camera will testify that this is a good job. This is the Goodluck Jonathan Agbor Station which incorporates the railway facilties which you just visited.