The Judiciary’a decision to proceed on its annual two-month vacation, despite the disruption of normal court calendar this year by the Coronavirus pandemic, has sparked a debate in legal circles, write ERIC IKHILAE.

Lawyers, litigants and other courts’ users had hoped for an improvement in courts’ activities, with the gradual easing of lockdown measures, only to be hit with the news of an impending shutdown of courts nationwide, for the next two months, because it is the time of the year when judicial officers (judges) proceed on their annual long vacation.

Courts’ heads have since made public their vacation schedules for the 2020 annual judges’ vacation. By a notice issued by the National Industrial Court of Nigeria (NICN), its eight-week vacation period will run from July 27 to September 25, 2020. For the Federal High Court, the Court of Appeal, the Supreme Court, the High Court of the Federal Capital territory (FCT) and many other courts, the schedules are not different from the one released by the NICN.

The refusal of the courts to shelve their annual vacation, even with the disruption in the regular court calendar by COVID-19, has sparked debates, with some accusing the Judiciary of displaying insensitivity to the plight of millions of litigants and other court users, who would be affected.

Others argued that the shutdown occasioned by COVID-19 was a period of uncertainty forced on everybody, during which no one could function. They argued that judges are human beings, who were equally adversely affected by COVID-19 and, as such, should not be expected to forgo the only opportunity they have to rest, attend to their health, assess their performance in the last one year and strategise for an improved performance in the new legal year. 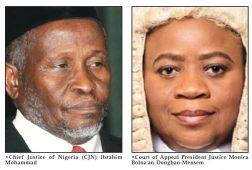 Perhaps, persuaded by the argument against this year’s vacation, court heads in some states like Jigawa, Nasarawa, and Ogun have ruled out a formal vacation for judicial officers in their courts this year. The states hinged their decision on their realisation that there are many pending cases that needed to be attended to.

In a statement, Deputy Chief Registrar 1, of the High Court of Ogun State, Martins Akinyemi, said the Chief Judge (CJ), Justice Mosunmola Dipeolu, directed that there would be no vacation in the state’s Judiciary this year.  Akinyemi said the CJ would only approve individual annual leave for judges.

“During this time, all the hierarchy of courts, to wit: The High Court, Magistrate Court and Customary Court will all be operational. Please, note that individual Hon. Judges will proceed on annual vacation as approved by My Lord, the Hon. Chief Judge,” Akinyemi said.

Justifying the decision to suspend vacation this year, Jigawa’s CJ Justice Aminu Ringim said the cancellation was due to the prolonged stay at home by judges, due to the COVID-19 pandemic.

Justice Ringim added that the volume of cases pending and the readiness of the judges to attend to such cases expeditiously, with a view to decongesting correctional centres, made the cancellation necessary.

Among those uncomfortable with vacation for judges this year is a group, the Justice Reform Project (JRC), which argued that the decision of courts to proceed on vacation in the face of the negative impact of the COVID-19 on courts ‘calendar was insensitive and an assault on the rule of law principle.

JRC urged all heads of courts to suspend their respective vacation period until 2021 and to apply themselves, by all means, to addressing the backlog of cases, with a view to upholding Nigerians’ right to justice.

The group argued that for the last three months and counting, the nation’s administration of justice system has largely ceased to function as a result of quarantine measures put in place by the governments at both federal and states levels to stem the Coronavirus pandemic.

“Across Nigeria, therefore, most judges have somewhat been on vacation during this period. With a partial resumption of judicial activities, some courts have only been hearing matters considered to be urgent, essential, and time-bound. All other matters have been continuously adjourned.

“The opportunities of technology for virtual hearings as well as other procedural measures to continue the business of justice have not been embraced by the courts, and a cultural affinity for delay appears to have prevailed.

“Nigerians are entitled to expect that our judges would recognise their legal duty and high responsibility to the administration of justice and that they would seek to sustain public confidence by efforts to cover lost ground and slow down the mounting backlog of unresolved cases.

“The indication that judges prefer to proceed on vacation, will rather reinforce a widely-held view that the court system is no longer relevant as a platform to resolve disputes between members of society. By this, litigants are simply being encouraged to resort to extra-judicial means to settle disputes and to subject the Judiciary to ridicule and disdain.”

The group argued that the decision of courts to proceed on vacation at this time is condemnable and insisted that “those charged with the administration of justice should uphold its tenets beyond what may be misconstrued as promoting personal interest.

“This ill-considered declaration pays no regard to the right of Nigerians to access to justice. The judicial arm of government should be wary of treating citizens’ right of access to justice with levity. It must guard its constitutional role jealously and not portend normalcy in the most abnormal situation.”

Another group – Access to Justice (A2J – also expressed a similar view. In a statement jointly endorsed by its Convener and Project Director, Joseph Otteh and Deji Ajare, the group contended that it was insensitive for courts across the country to embark on annual vacation when several cases affected by COVID-19 nationwide lockdown remain unattended to.

It argued that the decision to engage in vacation after the long suspension of court sittings was not right and gave the wrong message about the Judiciary’s commitment to justice delivery, because thousands of cases were affected by the suspension of court sittings, following the halt in court activities nationwide in March, and the limited scope of hearings taking place now in view of the partial resumption of court business.

“Many of the cases affected by limited court sitting are cases that are delicate, time-sensitive, and vital for other processes or those that involve personal liberties. In some criminal cases, defendants who could not access pre-trial bail are in overly-congested correctional houses and institutions that also present a very peculiar problem of their own.

“Should there be a COVID-19 pandemic outbreak in them, many of the inmates there would be at huge risks of infection with their lives on the line. The Judiciary, as an institution, has a primordial and frontline responsibility to protect human life, and this responsibility ought to weigh heavily on how its decisions, including vacation decisions, are arrived at.

“Second, the length of judicial vacations, when calculated cumulatively over a given year, is also excessive. In the present context, given that courts’ docket backlogs are possibly at breaking point, the Judiciary ought to have taken a different approach to the length of vacation period,” A2J said.

Two Senior Advocates of Nigeria (SANs), Sebastine Hon and Mahmud Magaji, were unambiguous in their position that judges were entitled to this year’s annual vacation and should not be asked to shelve same.

Hon argued that “the judges should proceed on vacation, as usual, for at least two reasons. First, they will take charge of their personal safety and good health, now that the virus is spiking and spreading fast. In doing that, they will assume the virus will either die away or at least slow down when the vacation is over.

“Secondly, even the lawyers need such a break. Remember that Madagascar is reeling under the full weight of the virus now, after that country’s leadership wrongly thought they had got the cure for the plague, and then permitted willy-nilly social relations. Ghana had that experience too.”

On his part, Magaji said: “I do not subscribe to that idea; the reason being that, during the lockdown, it was for general application. You must also note that courts are not totally shut during vacation. There are vacation judges.

“So, going on vacation does not necessarily cripple the court. It is an opportunity for the judges to look after themselves, review their activities and make corrections where necessary.”

Those on the fence

A lawyer and rights activist, Daniel Makolo, noted that judges, as public servants, are entitled to annual vacation, leave or whatever it is called, but that there was nothing wrong in asking judges to also sacrifice in this era of abnormality.

Makolo said: “They are entitled to their holidays. The COVID-19 was forced on everybody. And, it came with tension and anxiety. Yes, the issue of whether or not they should forgo their vacation is that of consideration.

“They should come to terms with the fact that this was a circumstance beyond anyone’s control and that it was an act of God, that compelled everyone to adjust. The judges too should, on this issue, adjust and shelve their vacation’’.

Another lawyer and Executive Director, Stand for Rights Initiative (SRi), Sunday Essienekak, argued that although it was the ideal thing, in the period, to ask the judges to forgo their annual vacation, it was their entitlement.

Esseinekak said: “That is the ideal thing to do. But, you know that COVID-19 came up and everybody went on holiday. The idea of an annual vacation for judges is to give them the opportunity to rest and take care of themselves, because most of them sit for a very long period throughout the year.

“But, be that as it may, the popular opinion is that, COVID-19 came in and everything was shut down and everybody rested. They too rested for almost six months. Ideally, as judges who are expected to serve the interest of the public, the general opinion is that the judges ought to have shelved their holidays this year, because it is believed they also rested during the lockdown.

“But, whichever way you look at it, the issue of annual vacation is provided for in the Rules of Courts. It is their entitlement. The decision is left for the judges to decide whether or not they want to make this sacrifice for the society,” Essienekak said.